14U Konopka Keep Rolling, 2nd Tournament Championship in a Row 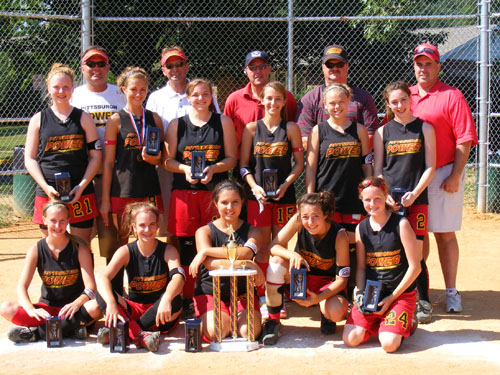 Congratulations to PGH Power Konopka 14U for winning their 2nd consecutive tournament in Chambersburg this past weekend and earning their 3rd first place finish in 4 attempts. After coming off a 1st place finish in Zanesville (NSA), a host of injuries and 95 degree heat, Coach K was a bit concerned going into the Chambersburg tournament.  Not only was the team a physical mess with injuries but 2 players were unable to attend the games. Coach K used 2 alternate players to field 11 bodies.

Two innings into the first game our very tough and rugged back up catcher Courtney Golem took a foul tip and broke her throwing hand finger.  With Erin Funderlich (1st catcher) nursing tendonitis, Trish Lemont, (4th catcher) came into spell Courtney 4 games in a row. Courtney & Trish were remarkable fill-ins for Erin. Erin was able to catch the last 2 games on Sunday and what a great job she did.  With tremendous hitting from Morgan Russo, Tara Konopka, Tricia Lemont, Matti huckstein, Erin Funderlich, Nina Spagnolo, Lauren Lusk, and perfect small ball execution by Julianne Hirsh and Steffi Hnat our team defeated many obstacles to win the past 2 weekends.  Thank you Carla Riggs for filling in and we look forward to having you the rest of the season.

Good job Matti Huckestein and Julianne Hirsch for 2 well pitched pool play games.  Congratulations to the tournament MVP, Tara Konopka. Tara pitched 3 championship games Sunday. Along with the consistent outstanding team defense, her final stats included 60 opponents at bat, 8 hits, 6 B.B. and 34 K’s,  She also finished 10 for 18 with a batting average of .555 and no strike outs.
Hats off to Morgan Russo not only for her great defensive play but having 13 hits at 19 bats with a batting average of .684 and 15 runs scored in 6 games. Morgan also received 2 game MVP medals.  Morgan performed this well playing with an aggravating elbow injury (bursa sacs) 2 weeks in a row.

There is absolutely no give-up on this team. I have never seen a group of athletes, especially 13 & 14 yr olds come together and overcome as much adversity as these young ladies had to do in 2 weekends. I am so impressed with our girls and how they respond positively regardless of the situation says Coach K.  I would like to thank my assistant coach John Golem and coaches - Greg Russo, Ed Huckstein, and our event coordinator Jeff Hnat for a job well done.
A special thank you to Debbie Hnat (team rep) for her hard work and dedication.  She continues without reservation to deal with the daily issues and organization of our team.  Deb – we couldn’t do it without you!

Great job to the entire Konopka 14U team family – we will continue to overcome the impossible.