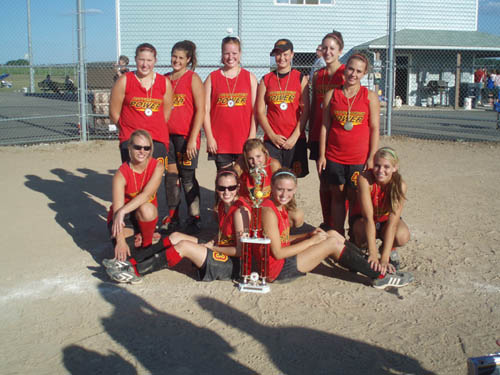 The Pittsburgh Power wins the Heart of Ohio Final Fling (6 wins, 0 losses) and out score their opponents 59 to 23 over the six games.

Saturday pool play began with the Wildcats scoring an unearned run in the 1st inning on a walk, error and passed ball, but Power pitcher Olivia Bovalina remained composed, yielding only one hit for the remainder of the game.  The Power defense complemented Bovi’s fine pitching performance by recording 9 ground ball outs and 3 infield pop-up outs.  After a fielding error in the 3rd inning, catcher Bri DeAngelo and infielder Lauren Clifford picked off the frisky Wildcat runner wondering a bit too far from 1st base.  No Wildcats reached second base after the 1st inning.  All nine Power hitters contributed to the 17 hit attack, including 2 doubles and 2 triples. The Power sent 12 hitters to the plate and exploded for 8 runs in the 2nd inning.  Jordan Murray went 3 for 4, including a double and 2 RBIs.  Sara Mantick hit 2 for 4, including a triple and 4 RBIs.  Brianna DeAngelo also went 2 for 4 with a triple and 2 RBIs.

Julia Floreak pitched a gem of a game yielding only 2 earned runs while striking out 7 Prowl hitters.  The first Prowl hitter of the game reached base on an infield hit.  She subsequently stole 2 bases and scored on a passed ball.  But the scrappy Power pitcher said ENOUGH IS ENOUGH and rung up the Prowl’s 2, 3 and 4 hitter with strike outs.  The Power made the best of all 12 of their hits by tallying 5 runs in the 2nd inning and 6 more in the 3rd inning.  Bri DeAngelo continued her hot hitting by going 3 for 3, with 2 doubles and 3 RBIs.  Olivia Vasey also contributed 2 hits, including a double and a RBI.  The game was highlighted with 2 fine running catches in centerfield by defensive specialist Elizabeth “Lou” Shiring.  Bri DeAngelo gunned down a Prowl base runner attempting to steal 2nd in the 5th inning with Olivia Vasey applying the tag.

The Power continued their 1st inning woes by yielding runs to the opponent for the 3rd straight game in pool play.  But Power pitcher Deanna Tritinger hung tough by scattering 3 hits over the next 5 innings and shutting down the Blaze offense.  Dee struck out 6 Blaze hitters and Lou Shiring continued her fine defensive play in left field.  Julia Floreak led the offense with a double, a single, 2 RBIs and 2 stolen bases.  Carly Mundie and Olivia Bovalina each contributed a pair of RBIs as the Power completed pool play with their 3rd consecutive 5-inning mercy rule victory.

The Heart of Ohio Prowl was looking for revenge when they matched up in the playoff bracket against the #1 seeded Pittsburgh Power.  The Power scored first when Jordan Murray led off the 3rd inning with an infield single.  Sara Mantick followed with a double that brought Jordan home from 1st base.  Later that inning, Dee Tritinger’s two-out RBI double brought home Olivia Vasey and Lauren Clifford to give the Power a 3-0 lead.  The Prowl answered back in the bottom of the 3rd inning when a sacrifice bunt brought home a runner from 3rd base.  In the 4th inning, Sara Mantick’s 3rd double of the game again scored Jordan Murray from first base who led off the inning with a solid single into right field.  Bri DeAngelo’s infield ground out scored Sara from 3rd base and the Power had all of the runs they would need to advance to the semi-final game.  The Power defense played an error-less game highlighted by a fine running catch in right field by Chelsea Costello and a wonderful ground ball get-and-throw from behind 2nd base by shortstop Olivia Vasey, all in the first inning.  Julia Floreak made a nice grab of a fly ball in center field in the 5th inning.  Jordan Murray pitched well and fielded her position smartly by twice cutting down lead runners late in the game to keep the lid on Prowl attempts to scratch out a victory.

The semi-final game started with the Power scoring 4 runs in the 1st inning with clutch RBI hits by Olivia Vasey and Lauren Clifford.  The tenacious Toledo Wizards answered right back with 3 runs of their own in the bottom of the 1st inning and the Power knew they were in for a battle.  The Power put up another run in the 2nd inning on Lauren Clifford’s single scoring Sara Mantick from 2nd base.  Chelsea Costello led off the 4th inning battling the Wizard pitcher for 8 pitches before ripping a double into left field.  Julia Floreak’s perfectly placed bunt moved Chelsea all the way to 3rd base.  The Power had runners on 2nd and 3rd after the Wizard’s gave 2nd base to Julia uncontested, keeping a close eye on the speedy Chelsea at 3rd.  The Wizard shortstop made a good defensive play cutting down Chelsea at home plate on Jordan Murray’s ground ball to short.  The Power had 2 runners in scoring position with 1 out in the 4th inning when Sara Mantick delivered on her 3rd hit of the game scoring Julia and moving Jordan to 3rd base.  A passed ball and a rare balk call (the Wizard pitcher offered a pitch but never let go of the ball as she slipped off the pitching rubber) gave the Power an 8-3 lead after 4 innings.  The Wizards closed in on the Power once again by scoring 3 more runs in the 5th inning on 4 hits.  Despite giving up 9 hits and 6 earned runs, pitcher Olivia Bovalina relied on another error-less defensive game to keep the Power undefeated and moving on to the title game of the tournament.

The championship game appeared to be a David versus Goliath match-up between a fast, small-ball Miami County Blaze Gold t