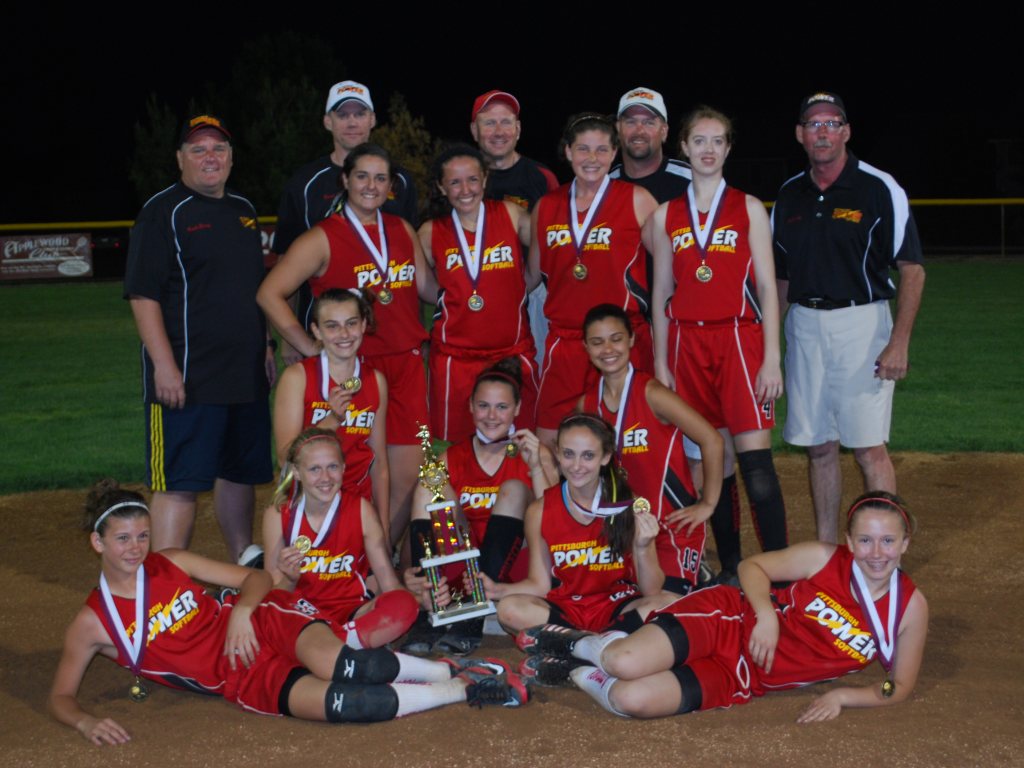 Sunday would not only showcase the girls physical ability but, also their mental ability as the girls would have to battle against the likes of the Poland Pride, Pittsburgh Pride, {pop_team:2012:Dobson:14U}Power-Dobson{/pop_team:2012:Dobson:14U} and a three hour storm from the always tough Mother Nature. Before the storms hit the Power-F/S team open up with a tough hard fought win against the Poland Pride. Moriah McGuier turned in her 2nd outstanding game of the weekend enroute to a 3-2 win. Solid defense help secure the victory and help the team advance to the semi-finals. After a 3 plus hour delay and an amazing job by the ground crew and tournament directors it was time to play ball again. The semi-finals would but the girls against the Pittsburgh Pride, a team that early in the tournament defeated the heavily favorite Pittsburgh Power- Dobson. Again the Power F/S team rode the ?hot? hand of Moriah McGuier as she turned in yet another exceptional performance from the circle. Defensively the girls turned in another outstanding job and the offense was sparked by the hitting of Taylor Finnegan, Spencer Sinclair, Natalie Graff and Taryn Sherry who had four consecutive hits in the 5th inning to break open a close game and secure not only a 5-2 win, but also a trip to the Championship game. Carli Eger and Spencer Sinclair picked up 2 hits apiece in the win and Taryn Sherry was 3-3 for the girls from ?Da Burgh?.

The Championship game would test the young Power team as they would square off against the older girls from Power (Dobson). The emotional drain in the Semi-final game would prove to be just too much as the older and more rested Pittsburgh Power-Dobson jumped to a 6-0 victory in a 4 inning rain shortened game.

Congratulation to the Power organization for a strong showing at the Field of Dreams tournament, also to Power-Dobson on their 1st place finish. To all the men and women who helped get the fields ready and finish the tournament. To the Pittsburgh Power-Finnegan/Sherry team on a great weekend of team softball. WAY TO GO GIRLS!!!!!!!